There are numerous theories about the origin of the term. Before the war, the term “digger” had been widely used in Australia to mean miner, or a Kauri gum-digger in New Zealand. On 25 April 1915, General Sir Ian Hamilton sent a message to the commander of the Australian and New Zealand Army Corps (ANZAC), General William Birdwood, following the landing at Gallipoli. It contained the postscript: “P.S.—you have got through the difficult business, now you have only to dig, dig, dig, until you are safe.”

W. H. Downing, in Digger Dialects (1919), a glossary of words and phrases used by Australian personnel during the war, says that Digger was first used to mean a New Zealand or Australian soldier in 1916. The word was not in wide use amongst soldiers until 1917.

While New Zealanders would call each other “Digger”, all other nationalities, including Australians, tended to call them “Kiwis”.

Dogface
Dogface refers to a U. S. Army foot soldier serving in the infantry, especially in World War II.

The origin of the term is difficult to ascertain. According to the recollections of veteran Phillip Leveque:

“Perhaps I should explain the derivation of the term “dogface”. He lived in “pup tents” and foxholes. We were treated like dogs in training. We had dog tags for identification. The basic story is that wounded soldiers in the Civil War had tags tied to them with string indicating the nature of their wounds. The tags were like those put on a pet dog or horse, but I can’t imagine anybody living in a horse tent or being called a horseface. Correctly speaking, only infantrymen are called dogfaces. Much of the time we were filthy, cold and wet as a duck hunting dog and we were ordered around sternly and loudly like a half-trained dog.”

The term was used in media such as “Up Front” by combat cartoonist Bill Mauldin, who may have heard the term while serving with General Lucian K. Truscott’s 3rd Infantry Division in Italy.

The term gained high profile in the USA when it was used in the 1955 film, To Hell and Back, based on the best-selling autobiography of Audie Murphy, the most decorated soldier of World War II, and starring Murphy in the lead role. The film included a song, The Dogface Soldier, originally written in 1942 by two U. S. Army infantry soldiers; it was adopted as the song of the 3rd Infantry Division, and was widely played and sung during the war. The song eventually sold 300,000 copies.
www.DogfaceSoldier.com

British Army soldiers were more commonly referred to as Tommies or Pongos. The term Brownjob was the lowest from of slang.
www.natureonline.com Royal Air Force Slang

Grunt
Slang for an US Army infantryman in Vietnam, Bosnia, Somalia, Columbia, Iraq and Afghanistan.

With the army combat rucksack weighing some 80 pounds the term requires no explanation as to origin. 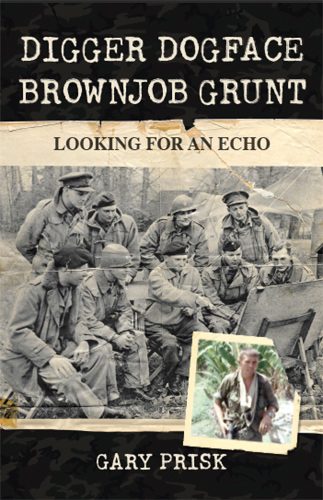 About the Books Pages