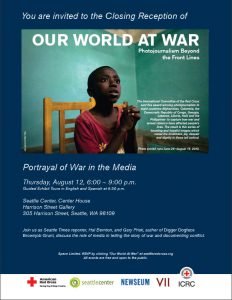 The International Committee of the Red Cross sent five award-winning photojournalists to eight countries-Afghanistan, Colombia, the Democratic Republic of Congo, Georgia, Lebanon, Liberia, Haiti and the Philippines- to capture how war and armed violence have affected people’s lives. The result is this series of haunting and hopeful images which reveal the loneliness, joy, despair and dignity in those left behind.

Over 2,000 people passed through the photo exhibit and attended the events at the Seattle Center, Center House, at the Harrison Street Gallery in Seattle, WA.

Closing Reception: Portrayal of War in the Media