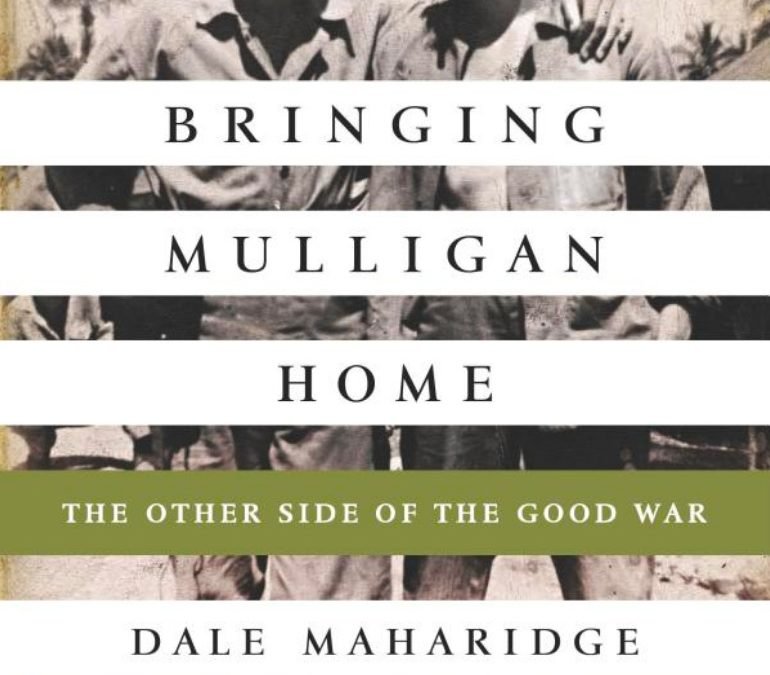 BOOK REVIEW: ‘Bringing Mulligan Home’:
For Veterans a Route-Map; For Their Families a Reasoning

Dale Maharidge’s ‘Bringing Mulligan Home’ is a wonderful story. The author brings to the art of non-fiction the rhythm and suspense of a tall tale. And yet the author was able to describe the brutality of infantry combat with graphic disgusts: the desecration of the dead; the collection of souvenirs including gold teeth and ears; the slaughter of the wounded including women and children, and; the orders both spoken and implied totake no prisoners—as it was in Vietnam when an infantry unit had limited support.

The author has written a book that should be required reading for those grappling with the crippling effects of Post-Traumatic Stress Disorder (PTSD). His father was haunted by the carnage he helped create, by having lived, and more specifically the notion that he caused the death of Herman Mulligan. Did he have a disorder? Sergeant Steve Maharidge had definitely changed. My God, he was screaming at a picture.

And so, Sergeant Maharidge sought the constant drone of grinding steel in the security of his foxhole, his basement. Here he could talk to his comrades, deny he caused Mulligan’s death, and scream at a picture of Mulligan, taken in 1944 on Guadalcanal. He could scream at the picture any time he needed to get the man’s attention. You see, in Sergeant Maharidge’s mind, he did not have a disorder, (PTSD). He was perfectly normal for what he had been through.

The man Sergeant Steve Maharidge saw in the mirror was Post-Combat Normal, and no matter who found him annoying, he was not going to be Civilian Normal again.

If only he could have served under General Douglas MacArthur he might be Civilian Normal now. That General may have been a pompous ass, but his tactics of bypassing Japanese held islands saved tens of thousands of American lives, and the slaughter of many more civilians.

To be crudely enlisted in Chester Nimitz’s ‘Corkscrew and Blowtorch’ school of tactics was a tragedy for the Marines of Love Company, 3rd Battalion, 22nd Marines—for every Marine fighting in the island-hopping Pacific Theater during World War II. Bypassing Iwo Jima and Okinawa would have saved tens of thousands of American lives. The author is far too kind to Chesty.

Sergeant Steve Maharidge would agree. So would Herman Mulligan, and Kennedy and the other Marines the author interviewed to recreate the battles and engagements, and the route-of-march of Love Company. And yet the slaughter went on, island after island.

For Nimitz a Marine was a number on a combat unit’s morning report, a plastic soldier. Mulligan was present for duty as an ‘Effective’ before he died. After being buried in an explosion and presumed dead, his body was paper-transferred out of Love Company and assigned to the 3rd Battalion’s supply channels—just Mulligan, a case of grenades, and a case of K-rations—same shelf, second and third bins. That Mulligan’s remains were missing only added intrigue to the grand victory.

Detailing the firefights with his father’s comrades, nudging them gently toward the goal of finding Herman Walter Mulligan, the author brings the reader to the island of Okinawa, to the battle for Sugar Loaf Hill, and to the turtle-back tomb where Mulligan died. As I sit here today, I would like to find Mulligan—and the rest of our MIA’s.

Masterfully written, amid the grizzly accounts of shooting the wounded, rape, and the shooting of wounded babies, the author is able to keep the reader focused, as one interview leads to another until the reader tries to help find Mulligan, and hopes Dale Maharidge finds his father’s nemesis.

A note from my father: Taken from Omaha Beach, June 1944: “One must never break faith with those who died.” Major Edward Prisk, US Army Infantry. My father’s one regret—the thousands of dead animals.

A note from the reviewer, a blooded grunt: Sergeant Steve Maharidge continued to bury himself in the drone of grinding steel, hollering at a picture of him and Mulligan taken on Guadalcanal in 1944. Sergeant Maharidge knew, as do all blooded infantry veterans, that loud, continuous noise allow our minds to travel back in time. The recall can be vivid. And, if left alone, we can temporarily sort out our demons. We might even holler at a picture. It is best not to interrupt the process.

Here is a tribute to the author, Dale Maharidge. Thank you for your effort to find Herman Walter Mulligan, one of America’s treasures. As an infantry veteran of Vietnam’s war I was honored to review your work. The story has helped me sort out the brutality of my war, and has put the atrocities I witnessed in perspective.