BOOK REVIEW: ‘Those Who Have Borne the Battle’ 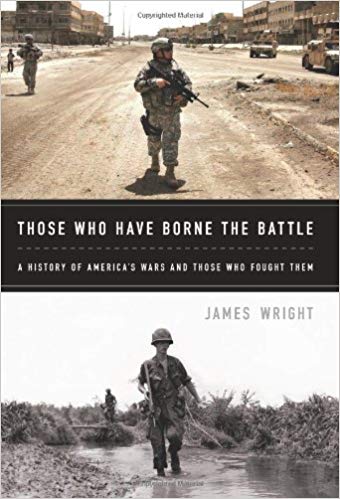 BOOK REVIEW: ‘Those Who Have Borne the Battle’: For Veterans a Hashing of

Perhaps we veterans do fight for meaningless hills as James Wright implies… But hear this — those hills are our hallowed ground. Ask any paratrooper about Hill 875. And what of Hill 60, near Flanders? Comrades died there between footsteps, between thoughts. No ground is meaningless to the veteran.

And when were not the hills-of-war meaningless to the quill drivers who wring their hands and cheer on cue, ignoring the derisive nature of those who scoff the veteran as he passes by? James Wright’s “Those Who Have Borne the Battle” is a serried circle of inferences drawn as facts through a compilation of comments gathered to buoy general sympathies for the war-protests of the past.

As one American veteran of World War II who landed in Normandy once said, “If you’re looking for sympathy, it’s in the dictionary between shit and syphilis.”

Yet when have America’s veterans asked for sympathy from those eastern men, those of policy and concern? The Bonus Army did ask Congress to keep their promise. That was when General Patton destroyed the Bonus Army veteran’s encampment.

General notes — soldiers do not win, nor do they earn purple hearts. They receive purple hearts. Binh Dinh is not a place, it’s a province. The Marines landed at the port city of Da Nang on a beach laden with reporters, comfort girls, orchids, and a band — their mission: perimeter-security for the port. The first combat unit sent to Vietnam in April of 1965 was arguably the best light infantry brigade America has ever sent into combat, the 173rd Airborne Brigade. They became known as “Westy’s Warriors.”

As a personal note — the Korengal Valley fight in Afghanistan was borne by the 2nd Battalion of the 503rd Airborne Infantry, 173rd Airborne Brigade, the unit this reviewer served with in Vietnam 1967-68 as an infantry platoon leader and company commander.

There is no “Battle Company” in the 2nd Battalion, rather a “Bravo Company.”

Marshaling a proper sense of probability, “Those Who Have Borne the Battle” must be read with historic tolerance.

For centuries historians and generals have written manuals and papers dissecting the nature of counter-insurgent tribal conflicts. Vietnam was a mix of tribes practicing four-hundred and ten religions, each religion confronting a communist movement dedicated to extinguishing the difference. America chose to defend those tribes.

The author’s chides about the military conduct of the Vietnam War and the current wars are about as rare as brass — evolving missions, ill-defined enemy, changing conditions. No enemy worth his salt is well defined and combat changes second by second.

The Taliban are seventh-century Huns dedicated to killing every Jew, Christian, and non-believer they can target — there is the definition worth noting. America’s veterans know who they are fighting and have defined their enemy at every turn. New army manuals will not help. Most are a rehash of British manuals written in the 1930’s.

“Those Who Have Borne the Battle” is a difficult read, facts and data supporting a general plea for the draft on one hand and a volunteer force on the other. Good stuff for policy types and board rooms. At bottom, I recommend the book for its conclusions. James Wright features a need for Americans to be more involved, to measure the realities of massive oversea deployments, and to restrain the Republic’s elected representatives.

James Wright clearly outlines the progress of support for veterans through the centuries, explaining how Korean War veterans and Vietnam veterans found themselves toiling on the poop of the USS America—the mud-pilots of unpopular wars. And the author is on the mark in every particular concerning the need to share the costs of sacrifice, especially the costs yet to be borne, his words well within the framework of an evolving question—why does America have large infantry units stationed in countries capable of defending themselves?

James Wright’s dedication to America’s veterans, to their community of doubt, is more than commendable—once a marine, always a marine. He stands his post, assured that the American veteran’s fidelity to a worthy standard of conduct will remain, and his support will be welcome.

America’s veterans have always been decent enough to fade quietly in the end.

The son of a WWII veteran, James Wright joined the Marines at age 17, became a history professor at Dartmouth College in 1969, and served as president of Dartmouth from 1998 to 2009. Since 2005 he has visited military hospitals and has encouraged support for wounded veterans, efforts featured in the New York Times, Boston Globe, Christian Science Monitor, National Public Radio, and VFW Magazine, and recognized by educational, veteran, and service organizations. He lives in New Hampshire.