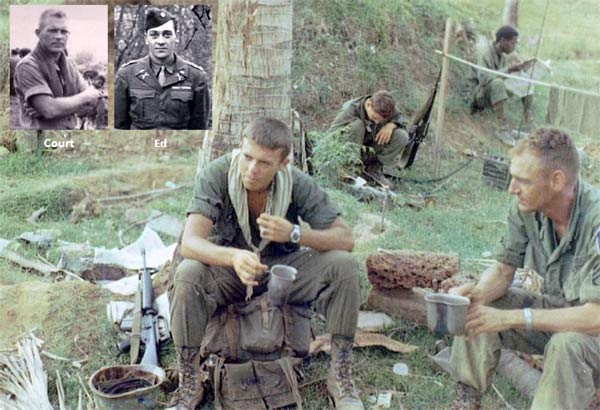 Captain Gary Prisk (Colonel Ret), seen here in center of photo in 1968, when he served as CO (C/D/2/503), enjoying coffee with SFC Oscar Cruz, just north of the Tiger Mountains during a brief respite from battle, with a couple of his “Hill People” in background taking a needed break. His fellow officers good-naturedly called him “The Teenage Captain”, and his men to this day affectionately call him “Cap”. His older brother Court, served as CO of C/3/319th Artillery in Vietnam, and their father, Major Ed Prisk served as a Tactical Liaison Officer on the staff of Field Marshall Montgomery during WWII landing on Omaha Beach (west) on June 6 during the last wave. We salute Cap and his brother and father. ATW Sir!