Does it matter where they came from? 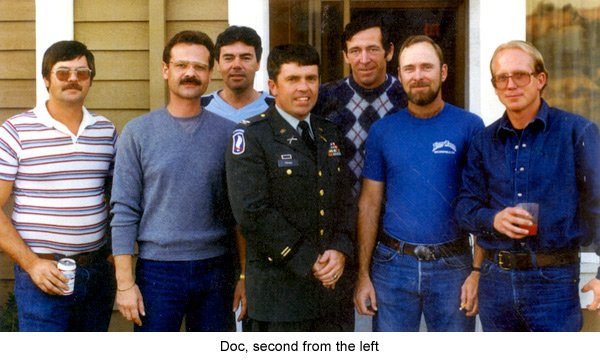 Does it matter where they came from? Medics, I mean. They were an odd lot, seemingly detached from the realities of infantry combat in Vietnam, in 1968, in the Central Highlands, and coastal rice paddies. Some professed to be non-combatants, claiming the weapon they carried was just a prop, foisted upon them by the Headquarters Company First Sergeant… “The bastard even made me carry ammunition.”

Once on the ground, these Medics would grudgingly agree to help us stalk our prey, so they could patch the ones we didn’t quite kill, all the while guarding their medical bags to keep us from stealing their drugs. These graduates of Fort Sam Houston were some of the bravest men I ever knew, kneeling in an open rice paddy, holding up a drip bag, ignoring the grazing fire that snapped past their heads.

Doc Michael Cosmo was one of the two dozen medics that I worked with in Charlie Company and Delta Company, 2nd Battalion, 503rd Airborne Infantry, the 173rd Airborne Brigade, a light infantry parachute regiment that has never been station on American soil.

Doc Cosmo died at his home in New Jersey this past year. Linus, Zulu, Water Buffalo, Wolfman, Ski, and I traveled to his home to help his family and friends wish him God Speed. Actually, we went to Doc’s home because we had to—he was one of us—a medic who helped us cope with the brutality—helped us cope with the deeply personal nature of combat. Our bonds cannot be severed.

Doc carried a 45. It was loaded. With the manliness of sentiment, he vowed to return fire, to help any Grunt he was next to when the AK’s started their music. He saved Linus from an early grave, using his weapon and then Linus’s M-16 during a fire-fight on the flank of the An Lao Valley, west of Bong Son, and Landing Zone English.

Doc Cosmo was my friend. Specialist Bobby Waddell sang it best. In fact, Bobby wouldn’t stop singing. Somewhere around the bend after surviving the Battle for Dak To’s, Hill 875, Bobby‘s voice played a raspy rendition—“The Shadow of Your Smile.” And that is what I miss most. Doc Cosmo… his smile was spontaneous, as was the humorous larceny he found in any minor misfortune a Grunt might encounter. His laugh had a New Jersey twang, and was always followed by smart-assed remark, further drawing the target-Grunt into a mental tangle.

If a Grunt asked Doc for non-combat medical help, that Grunt was in for one comical dig after another. No straight answers. Doc’s caustic remarks focused on the man’s upbringing, followed by any fearful malady that Doc could forecast for the man’s near-term prognosis. And yet, every Grunt in Charlie Company was his friend. Doc could be trusted with any confidence.

The few who knew Michael Cosmo have lost a part of themselves with his passing. We were and are devoted to keeping each other safe, alive, humping a rucksack. As time pushes us to keep steppin’, we will lose one another, and the heroism of our souls.
God Speed, Doc. If there is a heaven, I hope they don’t make you sing all day. With luck they’ll greet you with a shot of “Jack.”